In the second grade, Dr. Kelly McCord organized a neighborhood petting zoo filled with chickens, chinchillas, dogs, rabbits and lizards as a fundraiser for an animal protection agency. The $6.25 in admissions fees that he raised that day set the stage for developing the love he has for helping to preserve the amazing relationships between people and their pets.

Dr. McCord is a recent transplant to the Pacific Northwest from his home state of Colorado. He completed both his residency in internal medicine and Master of Clinical Science degree in 2011 at Colorado State University, from where he also received his DVM degree in 2007.  His research during his residency focused primarily on pancreatitis, hepatology, and gastrointestinal disorders, but his clinical training allowed for extensive experience in all areas of internal medicine.  He has particular interest in hepatic, autoimmune, and infectious diseases.

Dr. McCord has published multiple peer-reviewed veterinary journal articles on topics including canine acute pancreatitis, gastrointestinal disorders, and oxidative stress, among others, and co-authored a chapter titled "Hepatic Dysfunction" in Veterinary Clinics of North America.  He received the Distinguished Resident Research Award for gastroenterology at the ACVIM Forum in Montreal in 2009.  In 2013 he was awarded the Outstanding Gastroenterology Paper of the Year by the Board of the European Emesis Council and the European Society for Comparative Gastroenterology at the European College of Veterinary Internal Medicine conference in Liverpool, England, for a multi-institutional study evaluating diagnostic testing for canine acute pancreatitis.  Dr. McCord is thrilled to be a part of the northwest veterinary community.  He is married, has three cats and two Chihuahuas, and in his free time likes to kayak, play the flute (his previous career), and garden. 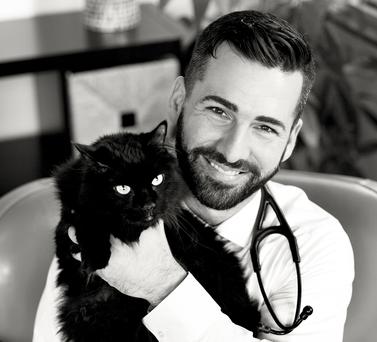